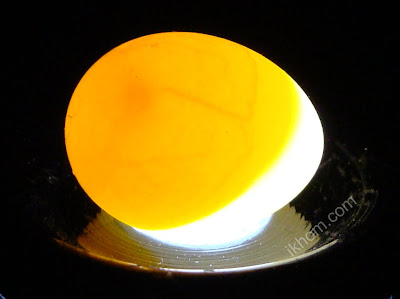 Yesterday I took a picture of an egg (Green Singer) that was incubated for 3 days. I knew that it is possible to see if an egg is fertile or not before the recommended 5 days. Sometimes it is possible to see after 2 days of incubation, but this is my first picture at such a stage. I can't be sure that it will develop. The Air Cell is located on the pointed end of the egg. I assumed that it was supposed to be on the round end. But I could be wrong.

For comparison I put the collage with my earlier pictures. What I know for sure: 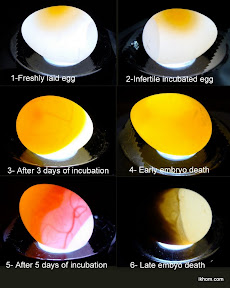 1- Freshly laid egg. (All freshly laid eggs look alike, with small Air Cells on the round sides of the eggs);
2- Old infertile egg. (It was incubated for about two weeks. Air Cell is much bigger, because of the moisture lost);
3- Egg after three days of incubation (my latest picture);
4- I removed this egg after being incubated for two weeks. It came from fertile pair. Originally I thought

that it was infertile, but after comparing it with the egg-3, it looks more like an early embryo death.
5- This was fertile egg after 5 days of incubation. I got a Green Singer from it.
6- This egg with a late embryo death. The chick was almost developed when my hen had stopped sitting on the eggs.
Last edited by ikhom on Sun Feb 07, 2010 3:00 pm, edited 2 times in total.

Those are great pics, and will definately help those whom are wondering what to look for.

These are great pictures.. so clear!

What kind of camera and what settings do you use to get such clear shots?
Granted I haven't tried photographing candled eggs since I bought my DSLR but when I tried with my older digital camera it was really difficult to get the photos to come out properly..
~Tiffany

Tiffany,
I’m using Sony DSC-H10 camera. It is not DSLR. It is under $300 camera, with 10x optical zoom and 8.1 M Pixels.
Picture properties from metafile:

I get the best results with these settings: small zoom (not more than 2-x), Macro mode, no flash and default automatic setting. I’m also using tripod to reduce vibration. Of course, the pictures you see are cropped from the original pictures like this.

I’m using regular LED flash light, so the light goes from the bottom up. I didn’t have a goose neck LED light when I started to take first pictures and I want to keep the conditions of taking the pictures the same for the best results.
Here is another picture when I used light on the side of the egg, similar to what we see on FIC. It looks good too. (Green Singer egg). 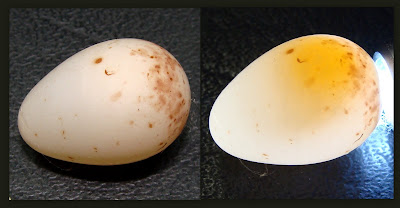 I think the lack of tripod is probably part of my issue, with my pre-parkinsons I can't hold the camera steady enough to get a clear shot if I try to do a no-flash macro setting with the old camera.

I can probably pull it off with the new one, though.
Also brilliant idea illuminating from under - I never would have even considered that!
~Tiffany

Fantastic photos of various stages of eggs--this will really help newbies when they start candling their own eggs.
3 Purple Grenadiers, 1 Goldbreast + 1 cat.

Here is another picture after 4 days on incubation. Not so much change. The egg becomes brighter orange in color and there are more blood vessels. 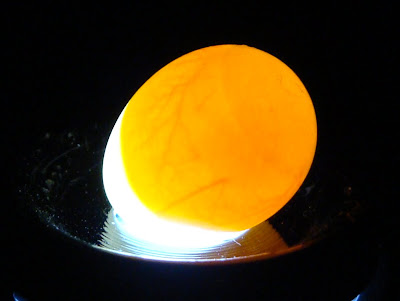 When I candle, my middle-age eyes have trouble seeing the details in the pix until the eggs gets to the 5-day RED color. The RED I can see.
Gary

After 5 days the egg changed color to red. (Today picture.) 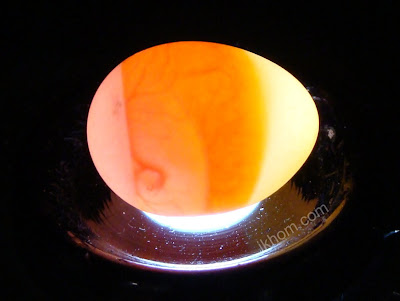 Wow, this is SO amazing!

Thanks for posting the pictures and video, that really helps a lot! I haven't candled many eggs yet and was never quite sure if I am interpreting it correctly.
Walk-in aviary with Waxbills (6 Cordon Bleu, 3 Orange Cheek, 3 Black-rumped, 1 Lavender, ), 1 European Goldfinch, 4 Gouldians, 2 Spice Finches, 6 Owl Finches, 4 Budgies and 2 male Button Quail.
I also have 2 parrotlets, 3 dogs, 1 snake and 3 freshwater fishtanks.

Here is another picture of the same egg after 7 days of incubation. 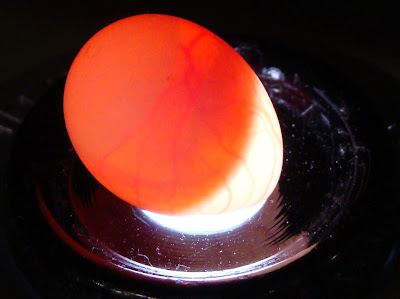 I bought a small LED flashlight, but the lens is still way bigger than a finch egg, so too much light goes around the sides. I did find I could set the egg on top of a socket from my socket set, but so much light still comes up from the sides that I don't get nearly the results you do. What brand flashlight did you get, and what do you use to block the light?
3 Purple Grenadiers, 1 Goldbreast + 1 cat.

This is an amazing aid ikholm. When I first began breeding I looked everywhere for a day-by-day guide like this. Never found one.... I'm sure this will be immeasurably helpful to someone just starting out.
Zebra, Orange cheeks, Owls, Gouldians, Blue-Capped Cordon Bleus, Goldbreasts, Black Face Fires, & Button Quail

Ikhom, your pictures are wonderful, so clear and full of detail, thank you for sharing them with us. I love seeing the development of an embryo.

Sally, we used to make a candler out of an empty clean can with a small hole cut smoothly into it. Then with a small pen light, or small flashlight with a flat end that can stand under the can and luminating the egg from underneath. We would set the egg on the can resting on top of the small hole(tinier than the egg) then turn the lights off and see if the egg was fertile.
Zebra, Gouldians, Java, CBM Shaft tail & Grasskeets

Sally wrote:I bought a small LED flashlight, but the lens is still way bigger than a finch egg, so too much light goes around the sides. I did find I could set the egg on top of a socket from my socket set, but so much light still comes up from the sides that I don't get nearly the results you do. What brand flashlight did you get, and what do you use to block the light?

I don't think it anything to do with my flashlight. (I have brinkman flashlight.) It is a simple one LED flashlight. I covered the opening with the eye piece from my telescope. It has a small hole, so I don't get too much light. (Picture is here ) I can get the same result with a goose neck LED light, that I got from Walmart, the same kind as Janine has, but I started with this flashlight and I want my pictures look the same. I would suggest using a goose neck LED light. It is much more versatile.
Actually the picture from my last post was disaster. Too much red and you can't see much inside. When an egg gets too dark inside, it becomes more difficult to get a good picture. I would like to play and get a better result, but I don't want to keep the egg away for too long or touch it too much.

Domenic,
I’m still discovering. Today I broke the egg #4 from my first post and it had a small embryo inside, so it was definitely the early embryo death.